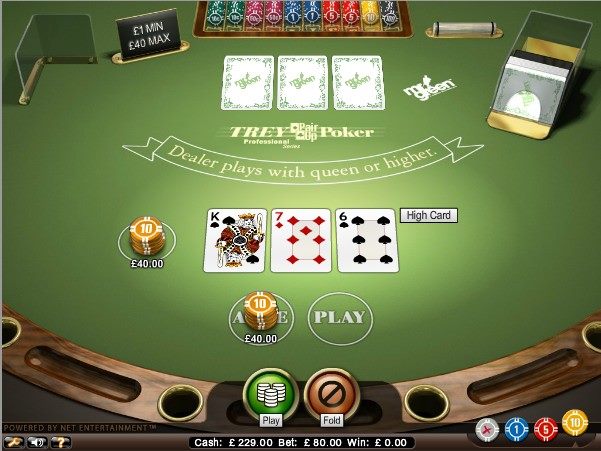 Trey Poker is a fast paced kind of poker. This game is developed by Net Entertainment. Unlike other poker variants, this game is based on three cards only. It pits players against the dealer. Each one of them is dealt three cards and you place your wager and the best poker hand wins. It is a very simple and an easy to play version of poker since it only depends on three cards.

Trey Poker is a video poker game at heart. This is because it does not involve other players but on the other hand, it is not a 100% video poker game as players will not be rewarded solely according to their hand, but it will have to be compared with the hand of the dealer. It is a 3-card poker and in this game, the three cards that players will get at the beginning represent their final poker hand, as there are no more cards and the players will not be able to replaced any cards and hold others. All of this will be discussed in detail in the Gaming Procedure.

The game is developed by Net Entertainment which means two main things. The first thing is that the game can be enjoyed at Mr. Green among other casinos. As for the second thing, which is the more important thing, it means that the game has amazing graphics, card dealing visuals, real and vivid shuffling sounds.

Like any poker game, the game will start with an Ante bet. An Ante bet is the wager that the players will place at the beginning of the game so they can initiate the game and start getting cards. The players will place that bet on the circle that says Ante on the table. They will do that by choosing a chip size and then placing as much chips as they want on this spot in order to specify their wager. This game also has a side bet that enables players to win greater rewards. This side bet can be found at another circle, it is called Pair Up. Players will place a bet that they will win if they get a pair in their 3-card poker hand.

After players place the wager, they can start the game by clicking on the green colored Deal button. The dealer will give the players three facing up cards while dealing himself 3 facing down card. The players will then decide whether they want to fold their hand and give up the Ante or click on Call in order to keep playing. If they click Call, they will place another wager that is equal to the original wager, the Ante.