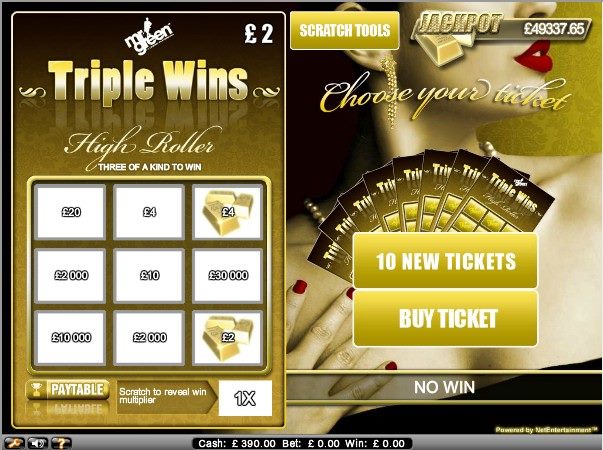 Triple Wins Jackpot is the same as Triple Wins, it is a usual scratch card game that allows players to win up to 10,000. In order to win, players have to scratch three identical money amounts. That money amount will be the payout. The only difference is that this game has a progressive jackpot. Players who get three jackpot signs on the scratch card will hit the jackpot of the game.

Triple Wins Jackpot is a Net Ent powered scratch ticket game which is the same as Triple Wins. The only difference is that this game has a golden color theme to it and of course, which is clear from its name, it has a jackpot win. This makes triple Wins Jackpot a progressive jackpot scratch card game. This means that whenever players buy a Triple Wins Jackpot ticket on any Net Ent powered casino, such as Mr. Green among others, the progressive jackpot will increase and it will keep increasing until a lucky player hits that jackpot. Players can also enjoy the game for free here on this website so they can get to know the game more before playing it with real cash at online casinos.

As mentioned, the game has the same design and layout of triple Wins but instead of red being the dominating color, it is gold. On the right side of the screen, players will see 10 tickets and two buttons under them. There is a buy ticket button and 10 new tickets button. Players will choose one of these ten tickets and they can get ten more cards when they finish the ten cards available or at any time they want.

On the left side, the players will see the ticket that they have purchased that they will scratch in order to claim payouts. This ticket consists of nine squares and under them, there is a 10th square that they will scratch in order to reveal a multiplier that will multiply their winnings if they are eligible for any. They will also see the paytable of the game. Since the game is not a slot machine, the paytable is a little different, it does not show winning combos but it shows players their odds and chances of winning according to the number of cards that they play.

The game starts as players purchase a ticket which costs 2 casino credits each. They will do that at the right side of the screen by clicking on Buy Card after choosing one of the ten tickets available. At any time, players can click on 10 New Tickets in order to get a new set of 10 tickets to choose from. They will then choose a scratching tool that they want to use in order to scratch the card. This can be found at the right side of the screen under Scratch Tools. The game offers players 4 different tools. These tools are a golden coin, a key medallion, a pin and a ring.