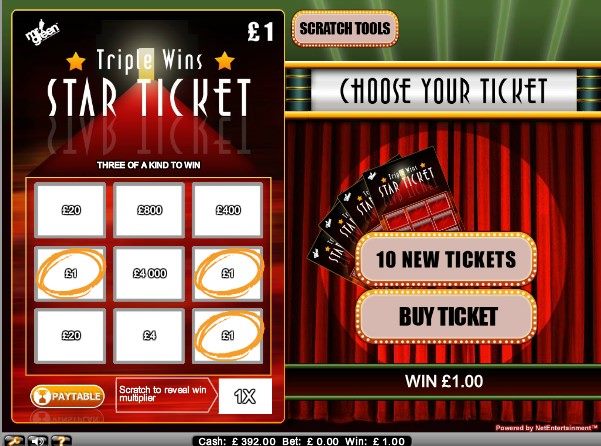 Triple Wins Star Ticket is like the original Triple Wins ticket. All what players need to do is buy a new ticket. The ticket has nine squares to scratch.  Player would then scratch it manually or click on scratch all to reveal what they have won. Players who get three squares with the same money value will be rewarded with that value. The top prize is 50,000 USD.

Triple Wins Star Ticket is a scratch card game that is developed by Net Entertainment. This guarantees players a very exciting and a fun gaming experience that is filled with rewards and presented to players in astonishing graphics and audio effects. This game can be enjoyed here at Best Casinos for free or it can be played with real cash at any Net Ent Powered online casino including the accredited Mr. Green Casino. Although the game is a normal scratch card game, it offers players plenty of options that would allow them to have fun while playing the game. These options will be discussed in the Game’s Setup.

As for the area on the right, it contains several things. It contains the scratch tools which can be found at the top. By clicking on the scratch tools, the players will be able to change the tool that they will use in order to scratch the ticket. These tools include a poker chip, a car key and a golden coin. The tool will not affect the result but it only makes the game play more entertaining. This side also includes the buy ticket button. Players will be presented with 10 tickets and players can select the ticket they want and click on buy Ticket. Players can get a new set of 10 tickets if they finish the ones there or at any time they wish. Each ticket will cost players one credit.

The game will start by players purchasing a ticket at the right hand side. The players will then choose if they want to use the default scratching tool or if they want to choose one of the other tools. After choosing the tool and buying the ticket, the players will start scratching the nine squares and the multiplier square. The players can also choose to manually scratch the card, which can be a little bit boring or they can choose to automatically scratch t by clicking on the Scratch all button.

After the scratching is over, the players can either choose another ticket from the remaining 9 tickets or they can ask for 10 new tickets to choose the new ticket from.