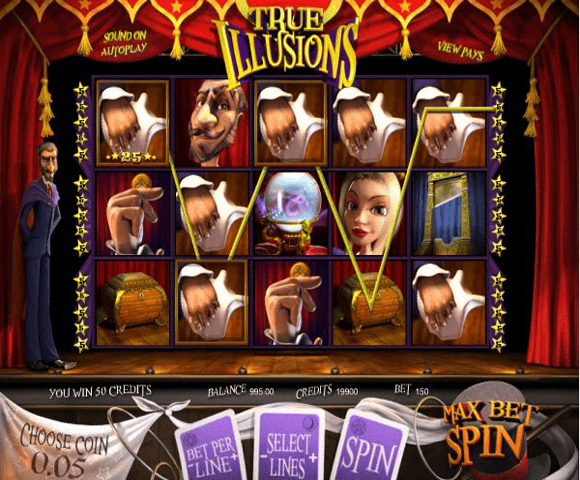 True Illusions is a Betsoft Gaming video slot that allows players to enter the world of magic and illusions. This game has five reels and thirty paylines. The game has many features that reward players for choosing the game. These features include stacked wilds and the Pick a Card feature among other cool bonuses. The symbols appearing on the slot machine include set of cards, a guillotine, a handkerchief, a set of cards and of course, a magician.

True Illusions is an outstanding game that would take players right into the world of magic and illusions. It would allow them to accompany a magician in a black suit as he performs his magic tricks on stage to wow the audience. You might call it magic and others might call it illusions but the end result is the same, it is fun and excitement. The players will be welcomed into the game with a magical intro that will make them engage into the game to the maximum. The game is powered by Betsoft Gaming which ensures players a visually exciting experience that is filled with rewards and bonuses. The game can be enjoyed with practice credits at this website but if players want to enjoy the game with real money, they ought to head to Mr. Green Casino alongside other casinos that are powered by Betsoft Gaming.

Like most 3D Betsoft powered video slots, the game is offered to players in 5 spinning reels accompanied by thirty different lines for the players to place their desired wagers on. At the bottom, players will find the control panel of the game, it is where the players will find the buttons to spin the reels, place max bet, place normal bets, choose lines and more. Since the game is themed around magicians and magic, these buttons comes in the form of the tools that the magician would use. For instance, the max spin button comes in the shape of a magician hat, the spin, select lines and bet per line buttons come in the form of playing cards while the coin value comes in the shape of a white curtain.

The players will also see the magician playing with a deck of cards at the left side of the curtains and he will interact with the game play as well as celebrating winning combinations with the lucky players. As for the reels themselves, they are located behind a red curtain on a stage where the magician usually performs.

There are three factors that determine the final wager that players can place. The first thing is the lines that the players would like to activate, the bet per activated payline and the coin value that they want to use. All of these options can be found at the bottom under the video slot’s reels. Players can place a bet as small as 0.02 and as high as 150 per spin. Players who want to place the maximum bet can click on Max Bet instead of toggling between the wagering options.