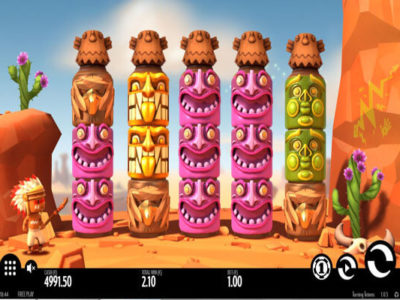 Turning Totems is one of the latest games to be released. This new game is developed by Thunderkick. Thunderkick has a great gaming portfolio that is always in the favor of quality of quantity. Therefore, whenever the developer releases a new game, players know that it is going to be an absolute hit. This can be applied on this amazing game, Turning Totems. The game has 11 wager lines with 5 reels. It also offers players a great selection of special icons, bonuses and winning chances for its players. The best part is the game can be played here for fun. Therefore, the players can try it out before they start placing real money bets on the game.

Turning Totems is the latest game to be released by Thunderkick. The game has already gone live at many Thunderkick casinos, and it is already proving to be an outstanding hit. This is because of the high quality experience that the game offers. This includes the visuals, the sounds, the game play and of course, the rewards.

Turning Totems is a 5 reel game that comes packing 11 wager lines. Although this format might make some believe that the game is not rewarding, they are terribly wrong. This is because the 11 wager lines of the game can be quite lucrative. In addition, they host a great set of special icons and features that players can trigger to claim tremendous rewards.

The game’s setup, like most Thunderkick games, is quite simple. Players will see the different control panel buttons under the reels. They will be able to control the game play, the bets, spinning the reels and more.

The game is quite lucrative. This is because it has many special features. For starters, there is the wild icon. This wild icon can appear sleeping on the reels. The wild icon can replace all other icons to help players grab a payout.

There is also the snake bonus icon. This thunder snake can turn any reel it lands on into a Thunder Reel. This would trigger a re spin, and it would awaken all sleeping wilds that are on that reel.