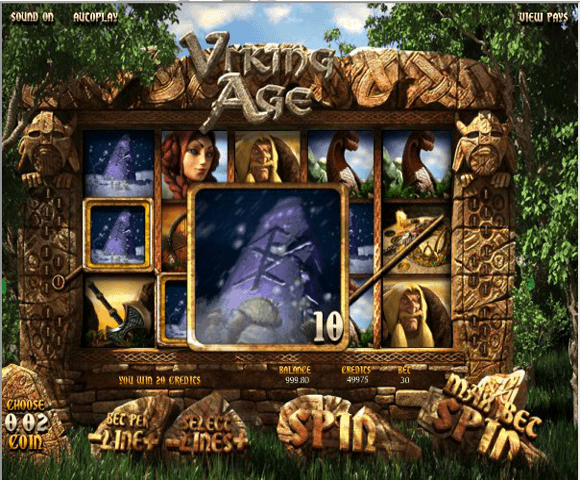 Viking Age video slot takes players into the time of the Vikings, those brave and fearless warriors that once ruled the north. This game has five reels and thirty lines for players to wager on. This Betsoft gaming video slot machine has a wagering range that varies between 0.02 USD and 75 USD. This is why the game appeals to a large base of online gamblers regardless of their budget. The game also has a set of features such as the Runestone bonus and a gamble bonus game.

Viking Age is a wonderful 3D video slot machine from the video slot gaming portfolio of Betsoft. Being a Betsoft powered game means that players will be able to enjoy wonderful 3D graphics and outstanding digital sound accompanied by rewarding and lucrative bonuses and features. It also means that players can enjoy it here for free or they can head to Mr. Green casino besides other internet casinos that are powered by Betsoft Gaming in order to enjoy the game with real money. In simpler words, the game provides players with an outstanding gambling experience that is unmatched anywhere else on the internet.

The game is obviously themed around the brave and the fearless civilization of the North, the Vikings. The men lived and died by the sword and it would be their dream to die in battle to go to the halls of Valhalla. This theme is obvious from the name of the game and the game’s design as well. Players will also notice that there is a mighty Viking lady at the right side of the reels, Amma. She will interact with the players’ game and celebrate winning combinations with him. Also, at some of the bonus features, she will be a part of the game play.

As for the symbols of the game, they include a Viking axe, a Viking shield, a Viking sword, Amma, a Viking warrior, a Viking ship, a king’s crown and other symbols. Some of these symbols will become animated whenever they contribute in the formation of a winning combination of symbols. All of the symbols can be found across the thirty lines and the five spinning reels of the game.

The game’s wagering range can be determined by the player as he goes through the different options available at the control panel that can be found under the game’s reels. They will find buttons that come in the shape of ancient stones. Players will determine the wager by choosing the number of lines they want to activate, the number of coins per line and the size of the coin. This creates the betting range of the video slot that varies between 0.02 and 150 coins per spin.

The players will be able to view all of the bonus and rewarding features as well as the normal line payouts at the paytable of the game. This paytable can be found at the top right corner of the game’s screen. One of these bonus rounds is the Runestone onus round which is triggered if players get three Viking helm symbol. In this round, players will accompany Amma as they try to choose symbols that would enable them to claim instant rewards, free spins or access to the bonus round. Another bonus round, the free pins round can be directly triggered when players get a minimum of three Amma symbols on the reels.