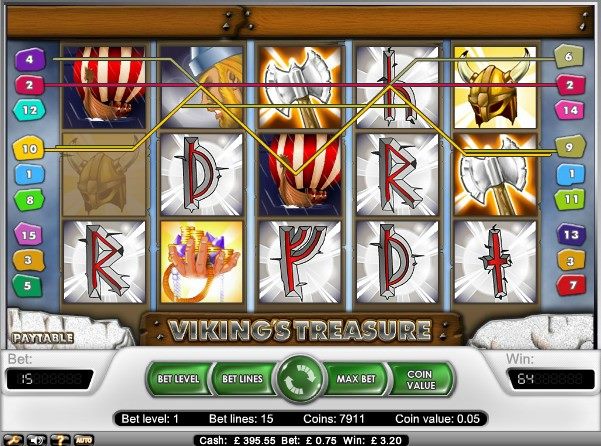 Viking’s Treasure is a video slot that takes players into a very rewarding journey to the north where great warriors come from, the Viking. It allows players to share these spoils of war with these Viking through this amazing video slot machine. It is a video slot machine by Net Ent with five non-progressive reels and fifteen paylines. It also has a major jackpot that is equal 25,000 coins and other high paying features and bonus rounds.

Vikings Treasure is a very exciting video slot machine from the portfolio of Net Ent. It takes players to a journey up north to meet the brave warriors of the north, the Vikings. It enables players to go through that journey in search for riches and treasures of the mighty and brave Vikings. The game is presented in great graphics that will immerse players into the theme of the game accompanied by a sound track that is themed around the Vikings with sounds of swords, ships and wolves in the background. All of this helps players to enjoy the game to the max. The game also comes packed with a hefty sum of rewarding features that enables players to enjoy the game while earning rewards. The game can be tried for fun right here or players can head to any Net Ent powered casino like Mr. Green in order to enjoy the game with real cash.

The theme is apparent from the name of the game, it is about the treasures and the riches of the brave Norse warriors, the Vikings. These Vikings used to raid cities and countries in order to loot their treasures and this game invites players to go along these brave Vikings in search for these hidden treasures and riches. Players will be invested into the game because of its symbols, soundtrack and design. These symbols include a Viking ship a Viking warrior, a Viking shield, a Viking helm, a Viking female alongside card symbols that are crafted in a Viking design to fit the theme.

The game offers players 15 lines that they can place bets on as well as coin sizes that vary between 0.02 and 0.50. Players will also be able to choose a bet level that varies between 1 and 5. All of these options can be found by toggling the green buttons under the reels. The wagering range that players will place their bets within lies between 0.02 and 37.50.

These bonus features as well as the normal line payouts can be viewed at the paytable that is found at the left corner. The game’s wild symbol is the Viking warrior. It can help players achieve winning combos by replacing any other symbol and when that happens, the winnings are doubled. The scatter symbol is the treasure symbol, it triggers free spins as well as paying instant scattered rewards.