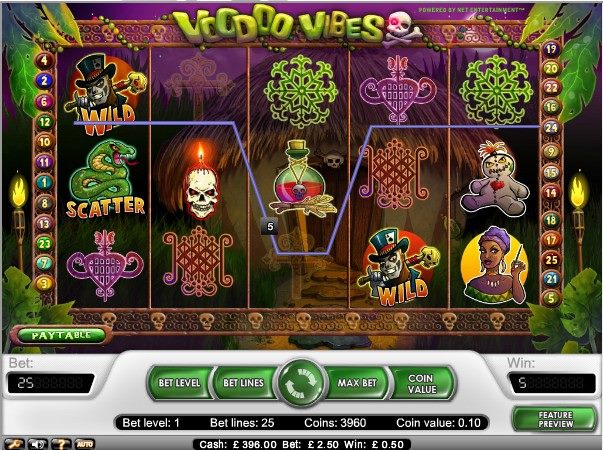 Voodoo Vibes is developed by Net Entertainment. It is a 25 payline video slot with five spinning reels. It is the slot machine that has it all. It has stacked wilds, scatters, bonus rounds and awesome features. It also offers players the chance to take advantage of free spins rounds to claim free spins on the slot machine.

Voodoo Vibes is a dark themed video slot machine that is developed by Net Entertainment. The game is themed around the dark magic and the dark world of African Voodoo. This is why the players will see Voodoo related symbols on the game’s reels as well as an African Voodoo music track at the background. This enables players to enjoy the theme of the game to the max. The game has amazing visuals which is clear in its symbols and the whole design of the game which does not come as a surprise as the game is powered by Net Ent which is known for its high quality games. It also means that the game has plenty of rewarding features and lucrative bonuses.

The game has a simple setup of five reels and 25 lines that players will be able to place their desired wagers on. The symbols and lines are filled with icons and symbols that are themed around the dark world of Voodoo. These symbols include a magical potion, a Voodoo priestess, a chicken, a cross with a skull in the middle, a Voodoo doll, a skull with a candle on it and other voodoo signs and symbols. The players will also notice that the reels are incased with a strip filled with skulls and bones to fit the theme of the game. Other than the symbols and the design, the soundtrack of the game that players will enjoy while playing is also themed around the dark magical art of Voodoo.

Under Voodoo Vibes’ reels, players will find the control dashboard of the game that allows them to control the different aspects of the game. This includes placing the bets, placing the maximum bet, spinning the reels, viewing the paytable, controlling the sound and more.

The players will have to determine their bet before they can spin the reels, if they spin the reels without placing a wager then the default wager or the last placed wager on the video slot will be their wager. Players can place the maximum bet by clicking on Max Bet or they can go through the available options in order to place a wager. These options include the betting level, the value of the coin being used for the wager and the lines that players would like to place their wagers on in order to activate them. This creates the game’s wagering range. This range varies between 1 and 100 per spin.