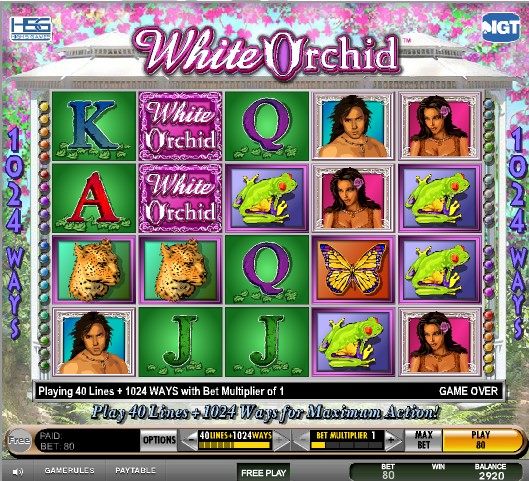 White Orchid is an IGT designed slot machine. It has five reels and forty paylines. This game has 1024 betting options, there is also the White Orchid’s MultiwayXtra which increases the wining chances of players from 243 to 1,024. It has 20 independent reels, which enables players to take advantage of huge clusters of matching reel symbols. There is also a very rewarding bonus round that gives free spins, it is entitled Falls Free Spins bonus.

White Orchid is an International Gaming Technology (IGT) powered video slot machine. Therefore, the game can be enjoyed at the variety of online casinos that are powered by the software developer. The list of online casinos includes GUTS Casino among others. In this game, the players will be able to be one with nature as they enjoy this natural themed 1024 ways to win slot. The game is presented to players in stunning graphics, amazing visuals and equally stunning sound effects. All of this creates the ambience and the mood suitable for players so they can enjoy this game to the fullest.

The game is themed around Mother Nature, which is pretty obvious from the name of the game as well as the symbols and the layout of the game. The game has a unique concept as it allows players to bet on 40 paylines plus giving them 1024 ways to win, which means that players will have a lot of chances to achieve winning combinations and earn various payouts. The game has five spinning reels but each square of these reels spins independently which gives the game a whole new look while the reels are spinning.

The reels of the game include symbols inspired by Mother Nature such as butterflies, a frog, the game’s logo, a leopard, a white flower, a male and a female. It also includes poker card symbols that are designed in a way to fit the natural theme of the game. Under these reels, players will see the control panel of the game. This control panel with its yellow and silver colors enables players to take control of the game. It is where players will place their wagers, place max bet, specify bet level and spin the reels. It will also allow the players to open the game’s options and view the paytable of the game. This paytable would allow players to get a quick look on the different winning combinations that would make them eligible for a payout as well as the special features and bonus rounds that the game has to offer to its players.

The game’s wagering range is specified by players as they toggle between the different betting options. These betting options include choosing the number of lines as well as enabling the 1024 ways to win setup and toggling between the bet multiplier that varies between one and five. This creates the game’s betting range. This range varies between 1 coin and 400 coins per spin on White Orchid.

The logo of the game is a wild symbol. This means that it has the ability to substitute for any other symbol. This helps players in creating winning combinations and increases their chances of winning. The white flower is the scatter symbol and if 2 of these symbols appear on the reels, they will trigger the free spins round. The maximum number of free spins is equal 20 and it is awarded when players get 4 of these scatter symbols. 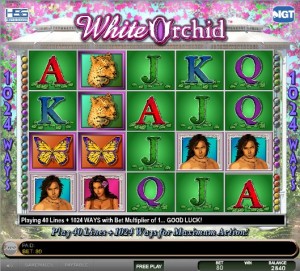 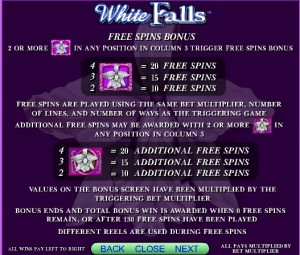 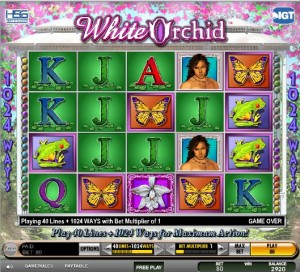