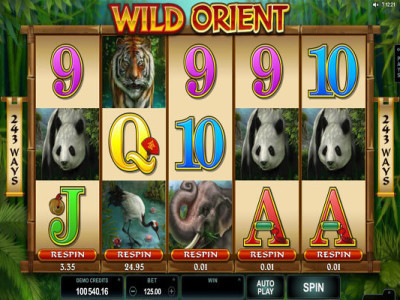 Wild Orient is a Microgaming pokie machine that is among the many new games that were set for a March release. The game is now released, and we proudly host the game here for fun so players can try out the pokie and see for themselves what it has to offer them before they can start placing real cash bets and deposits at online casinos that host the pokie.

The game has a 5 reeled setup that hosts 243 ways to win, so it means that whenever players start enjoying the game, they will have multiple winning chances across its 243 ways to win, in addition to the special icons and the re-spin function that the game offers.

Wild Orient Pokie is a Microgaming gift to all of the pokie fans and players out there. The game offers everything players might be looking for in a pokie, starting from a highly rewarding setup that hosts 243 ways to win, to the multiple special icons and features that the game proudly hosts. Players can find all about the great features of the pokie, as well as the special icons and bonuses at the payouts table of the game that can be opened by simply clicking on the Pays button that is found on the top right side of the screen. So get ready for a visually fun gaming experience that would take you to the Wild Orient for a chance to enjoy a great adventure, while claiming many prizes.
The Game’s Theme and Setup
Wild Orient is one of the newest 5 reeled video pokie machines by Microgaming. The game has a wonderful theme as it invites players to go on a great journey to the Wild orient, which explains the title of the pokie. Players will search the Chinese jungle for its long lost hidden treasures so they can claim these fortunes as their own, while watching the wildlife and the animals that live there.

This is why the 5 reeled set of the game, that hosts 243 ways to win, is located in the wild jungle. As for the symbols that are going to be spinning across them, they include the zebra, the elephant, the lion and a monkey. Other symbols include the logo of the game and the elephant head statue. These symbols have a lot to give to players in terms of payouts and features as well.

The game’s betting range is a result of the betting options that the game has, which are the coin value and the number of coins placed. Since players can place up to 10 coins with values up to 0.50, the betting range varies between 0.25 and 125 per spin.

The wild Logo of the game “Wild Orient” is going to act as a substitution symbol anywhere across the reels of the game to help players get paid on any of the ways to win of the pokie. It will not replace the scatter icon of the game, which comes in the form of the scatter elephant head statue icon. This symbol can give scattered prizes, as well as free spins.