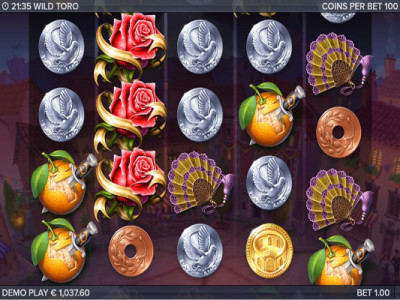 Wild Toro is the newest game to be released by Elk Studios. The game has a Spanish theme that takes players on a wild experience that is all about bullfighting. The game witnesses a clash between the Wild Toro and the Matador “Diaz Junior”. The battle has been going on for ages and players through this game will be able to become a part of it. They will witness the two battle it out across the reels of the game as players claim plenty of rewards and fortunes.

Wild Toro is the new Elk Studios powered slot machine that was just released. The game has a bullfighting theme that takes players to Spain. They will be joined by The Matador and the Wild Toro. Players will enjoy a well designed and a visually satisfying experience that takes them to Spain as they sit in their own home.

The game is also pretty rewarding, whether through its 178 ways to win, as well as through its special features and bonuses. All of them can be viewed with ease at the paytable of the game.

Wild Toro is a five reeled pokie machine that has got a total of 178 ways to win for players to take advantage of. Players can check out where and how they can form winning combos at the paytable of the game. It is also where they will find the different payouts that they can claim, as well as the bonus features of the game. The visuals are all of great quality that succeed in delivering an immersive experience.

The theme of the game is quite attractive as it invites players to travel to Spain. They will visit that country as they witness a bullfight between the Matador and the Wild Toro. The entire visual design of the game is inspired by that theme. This is why the reels are located in a Spanish town. They would also see a Spanish red flower, the Wild Toro, The Matador, Spanish golden and silver coins, oranges and the logo of the game.

Elk Studios knows how to pack its games with special features and icons, to make sure players get rewarded greatly during their stay. The first of these special icons is the Wild Toro logo. This icon acts as a wild that would replace all regular icons on the reels to help form the biggest line prize possible.

The Wild Toro itself is also a special icon that is called the Walking Wild, as it would walk from left to right triggering many prizes. The Matador, Diaz Jr. is the bonus icons of the game, as three of The Matador icons would trigger the Matador Challenge Re spin feature.