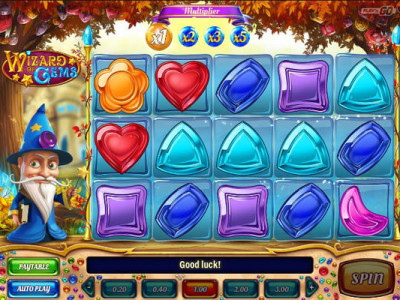 Wizard of Gems is a magical slot machine by Play n Go that was released a few days ago. Although every other gaming developer is busy with releasing Christmas holiday themed slots, Play n Go has decided to go a different way by releasing this magical and relaxing game. That does not mean that Play n Go didn’t release a Christmas themed game (as it launched Merry Xmas), but it decided to release something that is not Christmas-y, but has an equally magical experience as well. We are talking about the new game, Wizard of Gems. The game brings players into a magical world with the company of the magical being, the Wizard of Gems. Players will join him on a fairy tale adventure that is packed with plenty of features, bonuses and prizes.

Wizard of Gems is a five reeled Play n Go slot machine that has an amazing theme and a magical experience that takes players into a fairy tale world that is full of magic, with the Wizard of Gems. The Wizard is going to join players throughout the gaming experience. He is also animated, so he will move his wand and celebrate winnings with players as they form them.

Other than the magical experience of the game, it is also quite rewarding, as it has 20 high paying lines, as well as a wild, a free spins round and scatter wins, in addition to the multipliers that players can trigger by simply getting consecutive wins.

Wizard of Gems has a 5 reeled setup that boasts a total of twenty lines. Across these lines, players will see magical symbols that are inspired by the theme of the game. The game is entitled Wizard of Gems, and this is because the wizard is going to join players on a magical ride that is full of rewards as many colored and shaped gems spin on the reels to form combos and trigger bonuses.
The symbols include golden stars, magical spell books, and different gems including red rubies, emeralds, diamonds and more. Whenever players form a winning combo with matching symbols, the matching icons will disappear and new ones will appear to cover their spot, and with each consecutive win, a multiplier will be triggered. These multipliers vary between x2 and x5.

The game’s wagering range lies between 0.20 and 50 credits per spin. There are no betting variables or coin values, as players will select one of the already fixed betting values under the reels.

The spell magical book is wild, as it can replace other icons on the game’s reels to help players in triggering a payout. It will not be able to fill in the spot of the scatter symbol. Speaking of the scatter symbol, it is the magical golden stars. Players who collect three of these will trigger the free spins round and earn 10 free games. Players can trigger more, up to 50 spins.