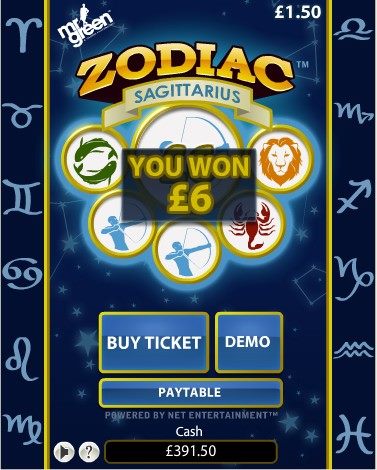 Zodiac is one of the innovative scratch tickets that are developed by Net Ent. In This game, players purchase a ticket and they reveal it. There will be a money value in the middle and if players get two matching signs in the circles surrounding the money value, they will be rewarded with this money value. A very fun and an exciting scratch ticket.

Scratch Card games are dedicated to players who want to put their luck to the test as the games do not involve any thinking, decisions or skill, it is just about luck. This is one of the most rewarding scratch card games that are powered Net Entertainment. It is also for the fans of Zodiacs and who believe that the planets and their alignment can affect our lives. This is because the symbols that the players will find after they scratch their card are Zodiac signs. The game can be enjoyed at Mr. Green Casino alongside their online casinos that are powered by the same software developer. The game, as any Net Ent. game, is presented in great visuals and equally stunning digital sound to immerse the players into the theme of the game.

The game has a pretty unique setup and format, it does not follow the standard setup of scratch card games. In this game, the players will see five small golden circles and one large one and the word Zodiac at the top. Under these squares, players will see three different buttons. There is the Buy Ticket button that players will click on in order to purchase a ticket, Demo, which allows players to try this game in a demo mode and the last button, the Paytable. This shows players their odds of achieving a win by showing the ratio between the number of cards and the possibility of winning. At the top right, players will see the purchasing value of the ticket and players will be able to control the sound of the game at the bottom.

The game’s background is dominated with the blue color and it also have Zodiac signs all over the screen. The symbols that the players will reveal as they scratch the small golden circles are all Zodiac signs. The players who are able to get two matching Zodiac signs will be able to claim a prize. This will be explained further more in the Game Play.

To start the game, the players will click on Buy Ticket button so they can get a ticket to scratch. After that, they will start clicking on the four small golden circles. When they scratch these circles, they will revealed the underneath Zodiac signs. The players who are able to get two similar Zodiac signs will be able to claim a reward. The players will be rewarded according to the cash amount that can be found under the bigger golden sign after they scratch it.

So if you believe in Zodiac signs and that they affect our personality and life, this is defiently the game of luck you are looking for